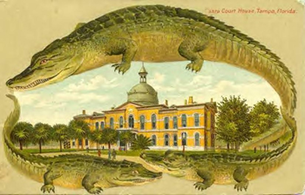 What is the applicable time limit for enforcing a foreign judgment pursuant to the Florida Enforcement of Foreign Judgments Act, F.S. §§55.501-55.509. The act does not contain an explicit limitation period, and from a superficial reading of its provisions, one can reach contradictory conclusions.

The Florida Enforcement of Foreign Judgments Act first provides that it shall not be construed to alter, modify, or extend the limitation period applicable for the enforcement of foreign judgments. However, the act does not specify, or reference the source of, the applicable limitation period. Several commentators have concluded that this provision of the act implicitly references and incorporates F.S. §95.11(2)(a) and its five-year limitation of an “action on” a foreign judgment.

In apparent contradiction, Florida’s act goes on to pro-vide that a foreign judgment, recorded pursuant to the act’s provisions, has the same effect as, is subject to the same defenses as, and may be enforced, released or satisfied as, a judgment of a circuit or county court of the State of Florida.’ From this provision, one could conclude that a foreign judgment is enforceable for the same 20-year period, pursuant to F.S. §55.081, as is aFloridajudgment.

No case specifically addresses or answers the question of the applicable time limit for enforcing a foreign judgment pursuant to the act.’ To resolve this apparent contradiction, and to determine the applicable limitation period, it is necessary to analyze the Florida Enforcement of Foreign Judgments Act, in the context of Florida’s statutory scheme regarding judgments, and the relevant case law. The first step in this analysis is to distinguish proceedings to enforce a judgment, from actions on a judgment.

Proceedings to Enforce a Judgment

A money judgment is merely a piece of paper representing a monetary obligation. A judgment creditor does not realize a monetary gain until and unless the judgment is enforced and the debt collected.

Proceedings to enforce or collect a Florida court judgment are subject to the time limitation of F.S. §55.081. This statute limits a judgment’s life to 20 years by providing that no judgment shall be a lien upon real or personal property within the state after the expiration of 20 years from the date of the entry of the judgment.’ The judgment actually becomes a lien on real property for consecutive periods of seven years to a maximum of 20 years, by the creditor complying with the recording requirements of F.S. §55.10.6

Florida law grants a judgment creditor seeking to en-force a judgment lien several tools. Discovery in aid of execution is authorized from any person, not merely the judgment debtor. Proceedings supplementary to execution are available when the plaintiff in execution files an affidavit informing the court that a sheriff holds an unsatisfied execution that is valid and outstanding.

As a means of foreclosing a judgment lien, the judgment creditor is entitled to levy, and execution sale by the sheriff, of property of the judgment debtor. In addition, special remedies such as garnishment and the appointment of a receiver are also available to a creditor seeking to enforce his Florida judgment.

Prior to the effective date of the Florida Enforcement of Foreign Judgments Act, October 1, 1984, these direct proceedings were not available to enforce a foreign judgment. Florida courts construed F.S. §55.10 to refer only to judgments rendered by Florida courts. Consequently, the filing or recording of a foreign judgment did not create a lien upon real property in a county in which the judgment was recorded. A foreign judgment creditor could neither execute upon property nor maintain a creditor’s bill in Florida’s.

Action on a Judgment

The language of the act appears to dictate that a foreign judgment recorded pursuant to the act is subject to the same time limitation as aFlorida court judgment.

By initiating a new and independent action upon a Florida judgment within the time limit of F.S. §95.11(1) and recovering a new judgment in the action, a creditor can obtain an additional 20 years, pursuant to §55.081, to enforce this new judgment.

The applicable limitation period for a new and independent action upon a foreign judgment is five years pursuant to §95.11(2)(a).22 By initiating a new and independent action on a foreign judgment within the time limit of §95.11(2)(a), the creditor, if successful in the litigation, would recover a Florida judgment. The creditor would have 20 years in which to record the Florida judgment, effect judgment liens, and obtain an execution upon the judgment.

A new and independent Florida action upon a foreign judgment, not filed within the five-year limit of §95.11(2), would be barred.

The purpose of the Florida Enforcement of Foreign Judgments Act is to provide a speedy and economical method of enforcing a foreign judgment. By proceeding under the act’s provisions, a judgment creditor may enforce “a foreign judgment without the further cost and harassment often incurred when an entirely new and separate action on the foreign judgment is required for enforcement.”

The application of the 20-year limitation period of §55.081 to foreign judgments recorded pursuant to the act is also consistent with the limited scope the Florida Supreme Court has given to §95.11(2) and its five-year limitation period. Section 95.11(2) has been held by the Florida Supreme Court to be inapplicable to proceedings which merely effectuate the lien of a judgment or which relate directly to execution of a judgment.

The Florida Supreme Court was asked in B.A. Lott v. Padgett, 14 So. 2d 667 (Fla. 1943), to decide whether F.S. §95.11(2) (1941), the predecessor to the current statute, operated to bar enforcement of a federal court judgment.” The 1941 statute pro-
vided that an action on a judgment or decree of any court of the United States or of any state or territory within the United States could only be commenced within seven years.

When analyzed in accordance with these Florida Supreme Court decisions, the recording of a foreign judgment and proceedings to enforce that judgment pursuant to the act do not constitute “an action on” the judgment. As a result, the five-year limitation of §95.11(2)(a) is inapplicable.

As a foreign judgment recorded pursuant to the act establishes a lien which is enforceable as, and subject to the same defenses as, a Florida court judgment, the 20-year limitation of §55.081 must apply.

A lengthy scholarly analysis of the various approaches other jurisdictions have utilized in answering this statute of limitation issue is provided by the court Le Credit Lyonnais, S.A. u. Nadd, 741 So. 2d 1165, 1168?1172 (Fla. 5th DCA 1999). In LeCredit Lyonnais, the appellate court was presented with the issue of whether a five-year limitation or a 20-year limitation was applicable to the recordation and enforcement of a foreign country’s judgment under a parallel uniform act, the Uniform Foreign

Money Judgments Recognition Act. The appellate court holds in LeCredit Lyonnais that the five-year limitation directed at actions brought on judgments of foreign countries does not apply to the registration, filing, or recording of a foreign judgment pursuant to the UFMJRA, and that the applicable statute of limitations are the ones pertinent to Florida’s domestic judgments.

The court’s lengthy analysis in Le Credit Lyonnais is consistent with and provides scholarly support for application of a 20-year limitation on the recordation and enforcement of a sister state’s judgment under the Florida Uniform Enforcement of Foreign Judgments Act.

The application of Florida’s 20-year statute of limitation is not only consistent with Florida’s case law and statutory scheme pertaining to judgment enforcement, it is also mandated by the U.S. Constitution’s Full Faith and Credit Clause. Florida’s enforcement of a foreign judgment is not a matter of mere grace, but springs from the Full Faith and Credit Clause, Art. IV, §1 of the U.S. Constitution and its implementing statute, 28 U.S.C. §1738.”

In fact, the Florida Enforcement of Foreign Judgment Act must be seen and interpreted as Florida’s statutory implementation of the Full Faith and Credit Clause. A Florida court is required to use the analysis of full faith and credit under the U.S. Constitution in any action to enforce a foreign judgment under Florida’s act. Moreover, preexisting case law on full faith and credit governs this analysis.

The animating purpose of the full faith and credit command, as explained by the U.S. Supreme Court:was to alter the status of the several states as independent foreign sovereigns, each free to ignore obligations created under the laws or by the judicial proceedings of the others, and to make them integral parts of a single nation through out which a remedy upon a just obligation might be demanded as of right irrespective of the state of its origin.

While the full faith and credit obligation regarding judgments is ex acting, it does not require a state to adopt the practice of an other state regarding the time, manner, and mechanism for enforcing judgments. Enforcement measures do not travel with the sister state judgment as preclusive effects do, for such measures remain subject to the even-handed control of the forum states.

In a per curiam opinion expressing the view of eight members, the U.S. Supreme Court explained that:

If appellant’s analysis of the purpose and effect of the statute were correct, we might well agree that it violates the Federal Constitution. For the decisions of this Court which appellee relies upon do not justify the discriminatory application of a statute of limitations to foreign actions.

However, the Supreme Court determined that Georgia state courts interpret their state’s statute to bar suits on foreign judgments only if the judgment cannot be revived in the state where it was originally obtained. Consequently, the Supreme Court held that the Georgia statute, by focusing on the law of Florida, did not violate, but rather insured, full faith and credits.

It is a fundamental rule of statutory construction that a statute be construed to be constitutionals. The application of F.S. §55.081 and its 20-year limitation period to a foreign judgment recorded pursuant to the Florida Enforcement of Foreign Judgments Act is an even-handed application of a limitation period as is required by the full faith and credit clause.

When analyzed under Florida’s statutory scheme regarding judgments and the full faith and credit clause of the U.S. Constitution, the following conclusions appear necessary: